Maritime Torrevieja and the salt trade

Since long ago, Torrevieja has been a favourable location for the exploitation of the salt generated in its surrounding lagoons, prompting the Administration of the Royal Saltworks, located in the nearby village of La Mata, to be moved to the city in 1803. From that time on, various activities have taken place, most notably the maritime trade of salt bound for various ports in the Mediterranean and the Caribbean.

In the first half of the twentieth century, the sailing fleet of Torrevieja was the most important in the Mediterranean. The city had a population of about 6,000 inhabitants and some 200 registered ships, 64 of which were pailebotes.

The name pailebote in Spanish came from the English “pilot’s boat”, but it could also be known as a goleta (from the French goélette and from the Breton gouelan, which means seagull), since both definitions were valid for this same type of ship. 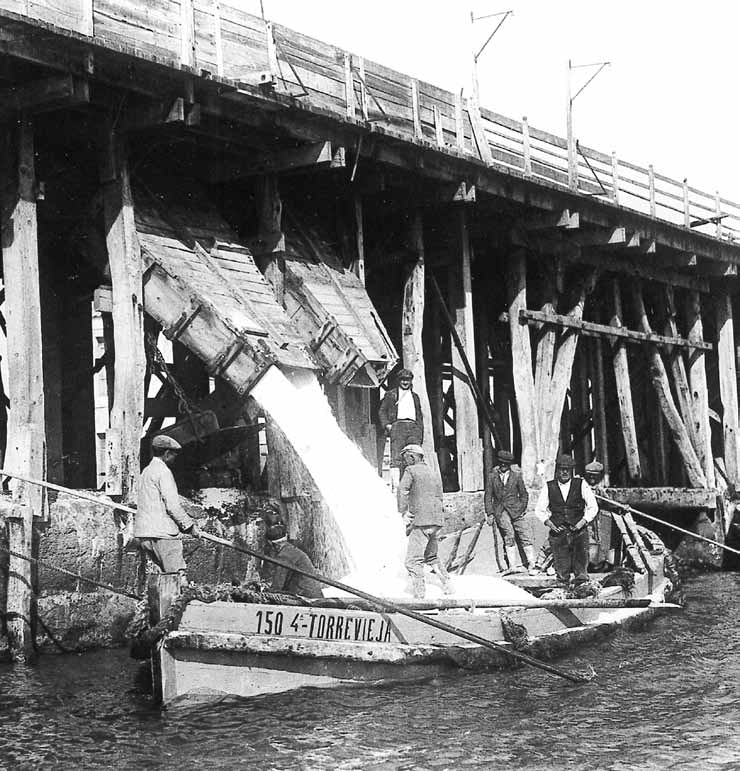 The decade between 1915 and 1925 saw years of significant activity for the sailing trade fleet of Torrevieja, gradually declining in later decades. Even so, in the 1940s, there were still numerous local vessels engaged in cabotage trade journeys, with Torrevieja being considered the last sailing refuge in the Spanish Mediterranean.

Many of the large ships built at the time were made by Torrevieja shipwrights such as Antonio Marí, known as “the storm”, builders of the famous pailebote “Pascual Flores” in 1917, among other ships.

In its early years, the pailebote was dedicated to the export of fruit, salt and general cargo, both in Mediterranean ports and anchorages and on the North and West coasts of Africa. Over the years, the vessel changed ownership and underwent significant modifications to its structure, ending her days in England.

In order to honour the memory of this thriving seamanship, the Torrevieja City Council purchased the “Pascual Flores”, which was in very poor condition in the port of Milford Haven, in 1999. The goal was to convert it into a symbol of Torrevieja’s seafaring character and the flagship of the city.

Between 2005 and 2008, comprehensive restoration work was performed on the pailebote, captained by master shipwright Antonio Carrasco.

After several years of inactivity and a certain amount of deterioration, the Torrevieja City Council and the Nao Victoria Foundation signed a collaboration agreement on 30 October 2020 for the transfer, repair and fine-tuning of the pailebote.

After six months of work in the shipyards of Punta Umbría (Huelva), the vessel is once again ready to sail and make stops in ports around the world to promote Torrevieja and its cabotage seafaring tradition.

The pailebote “Pascual Flores” is an original ship, quite unlike those that sail our waters today. Thanks to the agreement signed between the Torrevieja City Council and the Nao Victoria Foundation, the vessel will stop in ports around the world and appear at Europe’s major maritime festivals.

Throughout this year, the pailebote will begin a tour of both Spanish and foreign waters to promote Torrevieja tourism and culture and to share the history of pailebotes as transporters of salt. This floating museum, in addition to its scheduled tours, will visit the port of Torrevieja annually.

The “Pascual Flores” is a ship designed with maximum historical accuracy and utmost care for characterisation. It is powered both by motor and by sail and constitutes a highly versatile vessel. Its spaces and facilities are suitable for multiple needs, purposes and audiences, further demonstrating its ability to participate in a diverse range of events, ranging from corporate events to film productions, among many others. The vessel has a total surface area of 415 m2, some Xm2 on its main deck and capacity to accommodate X passengers.

The pailebote “Pascual Flores” is a unique vessel that will provide added value to the Foundation’s future projects, guaranteeing success whilst:

Being assured of an exceptional institutional and diplomatic welcome and impact in ports of call.

Do you want to enroll in the Pascual Flores? Now you can!

This website uses cookies to improve your experience while you navigate through the website. Out of these cookies, the cookies that are categorized as necessary are stored on your browser as they are essential for the working of basic functionalities of the website. We also use third-party cookies that help us analyze and understand how you use this website. These cookies will be stored in your browser only with your consent. You also have the option to opt-out of these cookies. But opting out of some of these cookies may have an effect on your browsing experience.
Necessary Always Enabled
Necessary cookies are absolutely essential for the website to function properly. This category only includes cookies that ensures basic functionalities and security features of the website. These cookies do not store any personal information.
Non-necessary
Any cookies that may not be particularly necessary for the website to function and is used specifically to collect user personal data via analytics, ads, other embedded contents are termed as non-necessary cookies. It is mandatory to procure user consent prior to running these cookies on your website.
SAVE & ACCEPT